Notes on the guitar fretboard: an introduction

While you can get by playing chords and patterns on the guitar without knowing individual notes by name, at some point you probably want to learn the note names across the fretboard—perhaps in order to help remember what you’ve played, read and write music, and communicate with other musicians.

What follows is a basic introduction to the notes on the guitar fretboard, also known as the fingerboard. Later posts will cover some rudimentary music theory and visualization tools to help you to understand how the notes are arranged.

Looking at a guitar fretboard can be a bit daunting because its layout doesn’t offer any obvious clues about where the notes are. The strings, frets and inlays (dots or other markings) don’t map on to note names in an obvious way.

In order to learn where the notes are, let’s start by writing out the note names on the fretboard.

Although not many guitar books do this, I’ve found it incredibly helpful to write the note names on the fretboard using a notation that distinguishes notes in different octave ranges. This allows you to refer to absolute pitches, rather than relative note names, and learn where to play the same absolute note on different strings.

The following diagram shows all the natural notes on a guitar with standard tuning, using Helmholtz pitch notation.

For printable PDF versions of the fretboard images in this blog post, see the last section below

This notation may be a little unfamiliar—but it’s actually very straightforward. It shows musical pitches using slightly different symbols in each octave range. A Helmholtz octave range always starts at C and ends at B.

The notes in the octave range starting two octaves below Middle C are written C D E F G A B. For the guitar we don’t need to worry about notes any lower than this, because the E within this range is the guitar’s lowest string played open.

The next octave range is the one starting one octave below middle C, and that is written c d e f g a b.

The next octave range after that starts c′′′… and so on, but once you’ve reached c′′′ you’re pretty much at the top of the guitar’s range. The exact upper limit depends on how many frets your guitar has, but it will be around here.

By convention the term Middle C refers to c′. The note c′ is an absolute pitch which has a frequency of 261.626 Hz, also written C4 in scientific pitch notation. Musicians know this as Middle C regardless which instrument is being played.

You may occasionally come across the note one octave below this (c) being referred to as Middle C. This has to do with the way guitar music is written; more on that later. However, it’s best to go with the general convention and always use Middle C to mean c′—especially if you need to communicate with other musicians.

The easiest way to play Middle C on the guitar is on the first fret of the second (b) string.

This notation makes it easy to unambiguously describe guitar tunings by specifying the absolute pitches of the open strings.

A quick glance at the chart above shows that standard guitar tuning can be written as: E A d g b e′.

There are several things to notice that simplify the task of learning the notes on the fretboard.

Another recurring pattern is that every string’s 12th fret is one octave above the same string played open. This means the entire pattern of notes on all the strings repeats itself from the 12th fret upwards, one octave higher. 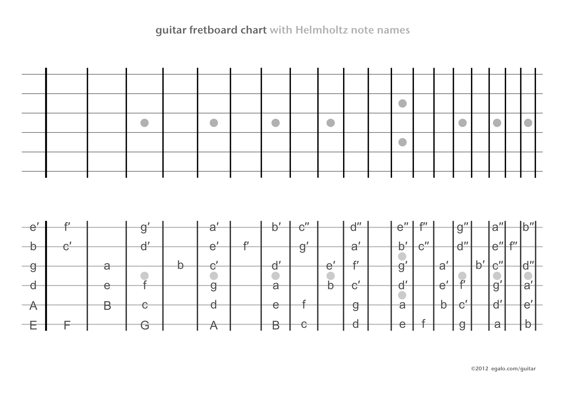 The guitar fretboard notes chart provides a single-sided PDF sheet with both a blank fretboard and a fretboard chart with Helmholtz note names. This means you can switch between the blank chart to test your memory, and the notes chart to confirm if you were right. The chart can be used as a quick reference, helper and learning aid.

Blank tab, fretboard and other charts are also available.